skip to main | skip to sidebar

I haven't been very active with Eve for a couple months now.  I pulled back from doing news earlier this year, then completely ceased doing the news shortly after fan fest.  There were several reasons.  Reasons that varied from in-game to meta-game to real life.  Not really pertinent to this blog post, but I figured I would mention this in case people weren't aware.  Anyway, on to recent developments! 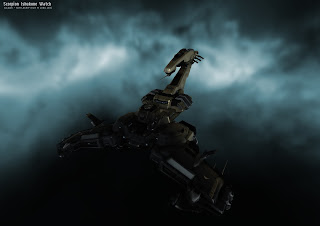 If you hadn't heard, a bit of a debate has begun over some gifts CCP gave to a group of players.  There's a lot of emotion over it all and what seems to me a dearth of facts.  So, I started hunting around for some facts about the Ishukone Watch Scorpions.

Ishukone Watch Scorpions (hereafter referred to as I-Scorps for brevity) were first spawned into the game during Fan Fest 2013.  They were given to each of the people who competed in the pvp tournament that year, a total of 80 ships.  Additionally, one I-Scorp was included in the prize pack for the winner of the poker tournament.  PLEX and other prizes were also given away.  So, at the end of April 2013, there were 81 I-Scorps in the game.

Somerblink were given 4 I-Scorps to give away around the same time as part of the Q1 2013 celebrations.  I tried looking for a link, but when you search for somerblink and ishukone scorpion... you get pages of results that are not about those four.

SCL was given I-Scorps for the people who made it happen.  There wasn't an announcement, but several commentators made public thank yous for the ships.  There are six people who run SCL, there were a few others who were commentators.  I don't have an exact figure, but the total given out was around 10 ships.

Somerblink staff were recently given 30 I-Scorps as gifts for their work in feeding Eve players' gambling habits.  There was an email that was leaked, leading to the outcry.

I don't see any reference to further ships being given out, but that doesn't necessarily mean they weren't.  When there were only 81 ships in the game, there were three sale posts on the forums that went up within a few days of each other - 1 2 3.  More probably have changed hands, but those are the three I found.  The first one sold for 25b.  The second one sold for an unspecified amount that was higher than the 15b top bid in the thread.  The third one did not sell, left at a high bid of 19b.

Assuming only those 44 (Somer prizes, SCL, Somer gifts) are the only additional ships that have been added to the game (and that is unlikely), the total number of ships has increased by 54%.  This has the effect of driving down the value of the ships.  Adding to that value is the simple fact that very few who have received the ships have been willing to part with them so far.  So, the next one to sell probably would struggle to make 15b.  However, if CCP continues to hand these out at the rate they are going, the value will continue to drop.

I had initially done a bit of digging to find some numbers to compare this to the well known t20 incident.  Since both T2 BPOs and these I-Scorps do not sell regularly, pinning a price on all of this is fairly difficult.  Here's what I came up with.

From Kugu's post listing the BPOs that were given to BoB, here's my estimation on their values (I used similar BPO sales when I couldn't find the exact ones):

Now, the value of the Ishukone Watch Scorpions is obviously harder to pin down.  The only sales we have were when the total in game was 81, now the total is at least 125.  So, we're going to go with a simple supply/demand curve (which will give us a pretty generous number for this) for the point where price meets demand.  While the very next sale of the ship might well reach 15b, the ship after that wouldn't sell for as much.  Dusting off my calc skills, I get a number a bit under 70 billion isk.  That's a very rough estimate of what Somer's crew would net if they dumped their ships on the market tomorrow (assuming people didn't purposefully not enter the bidding war to spite them).  So, that's a rough guess at the actual value of the ships that were gifted to them.  There is obviously an increased risk that more ships are introduced by CCP into the game, further driving down the price.  So, the longer they keep them, the less valuable they will be, which is contrary to all other limited release ships, simply because CCP has not put a limit to the number of ships they will introduce into the game.

If you've been watching my tweets, you'll know I'm not terribly happy about this gift.  There are reasons.  After an initial glut of them being released, CCP got stingy with them, until now.  If CCP gets stingy again and/or forgets they need to keep handing these out, then there is enough time for the price to stabilize or rise again.  If that happens, then that 70 billion isk value I quoted can go way up.  That is part of my worry, the other part of my annoyance is the fact that these gifts were given covertly.  When they were given out at Fan Fest, there was fanfare.  Why is this suddenly different?  When CCP goes into secret mode with its dealings with players, it rarely ends up looking good for them.

CCP had suggested at one point that they might put these onto the market in the Aurum store or, perhaps, the LP store.  This would put a fixed upper limit on the value of the ships, as well as set it in stone the value of the gift being given out.  This, coupled with giving these away in announcements, rather than in secret, would be the proper way of handling this situation in my opinion.
Posted by Bagehi at 11:41 AM